Look behind the comfortable myths of an educational system actively at work to alter your child’s moral values, worldview, and religious beliefs. Learn the history and philosophy of public school education — and discover it is based on neither Christian nor American values. Explore the biblical principles regarding education — and who is ultimately responsible for our children’s future.

Indoctrination: Public Schools & and the Decline of Christianity in America (DVD) ($25.00)

Nearly 90 percent of Christian children attend a public school. Join filmmaker Colin Gunn, a homeschool father of seven, on the field trip of a lifetime. Driving an old school bus, Colin and family travel across America exploring the origins and social impact of public school education to discover:

Winner of the 2012 Best Documentary Award at the San Antonio Independent Christian Film Festival, this extraordinary film features interviews from whistleblower teachers, administrators, students, parents, and others in a shocking documentary revealing the reality behind the classroom doors. Israel Wayne is one of the many guests interviewed on this film. (90 min DVD)

Why a growing number of parents choose not to send their children to public school.

The companion book to the award-winning documentary “IndoctrinNation”, this eye-opening book includes:

Look behind the comfortable myths of an educational system actively at work to alter your child’s moral values, worldview, and religious beliefs. Learn the history and philosophy of public school education — and discover it is based on neither Christian nor American values. Explore the biblical principles regarding education — and who is ultimately responsible for our children’s future. Israel Wayne contributed a chapter to this book. This book contains a lot of information that got cut from the 90-minute film, so it is complementary information, but not a transcript of the film. (384 pages)

If there is one thing that we ought to reexamine in light of the decline of the Christian faith and the ongoing generational apostasy, it is this matter of education. It is time to get back to the drawing board and ask the basic questions concerning the philosophy of education and child training. Now more than ever, we need to examine the wisdom of previous generations, particularly the teaching of those genuine Christian pastors and leaders who lived before the demise of the Christian West. If we would keep the faith for future generations, it would be prudent to root ourselves more solidly in the godly wisdom of previous centuries. Keep the Faith features original source quotations from church fathers such as Clement, Polycarp, Justin Martyr, Ignatius, Barnabas, Lanctantius, Didache, Eusebius, Jerome, Chrysostom, Augustine, Bede, Martin Luther, John Calvin, Richard Baxter, Increase Mather, John Wesley, A.A. Hodge, Charles Hodge, J. Gresham Machen, and others. (100 pages)

The secularization of America’s public school system has led to disturbing consequences. Suicide, drug abuse, promiscuity, teenage pregnancies, and abortion are all linked to the morally bankrupt public education philosophy that prevails in our nation’s schools. The Bible and the Blackboard provides a profound look at the public school system’s fall from a time when, in some cases, the Bible was a textbook, to the present, where Christian worldviews are outlawed from the classroom. It documents the history of the public school system in vivid detail and present American taxpayers with biblical alternatives for this failing, multi-billion dollar institution. 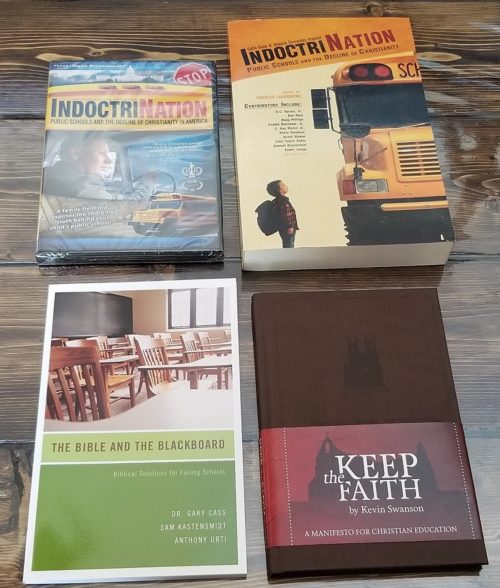