This new award-winning documentary film explores the incredible true story about the power of prayer and courageous faith in God as a family embarks on a fast-paced 5 day adoption journey.

Thinking that their first adoption was quick, as it took only 30 days, this family prayerfully decides to start the adoption process for the second time. Little do they know that in 5 days a baby will be in their arms!

The challenges faced in the adoption process were like crossing a raging river, something impossible to do on their own. In prayer, the family follows the example of the Israelites who were called to step into the raging Jordan River. The Israelites did so and God parted the river. In the same way, the family courageously trusts God and takes their step of faith, keeping their eyes on God and not on their circumstances.

From CAT scans, FBI background checks, Home Studies, to making travel and other necessary arrangements – all in 48 hours – this family saturates all decisions with prayer and praise to God. As they obeyed, the Lord moved.

Through a network of brothers and sisters around the country and even the Duggar Family from TLC’s 19 Kids and Counting and Jill & Jessa: Counting On, the power of God can be seen and prayers are answered every step of the way.

In 2014, award-winning filmmaker Kevin Peeples approached the adoptive family about interviewing them upon their return home from adopting sweet little Christina. What began as an effort to create a 3-5 minute short film about the quick adoption quickly turned into a full length documentary. Busy lives and multiple projects left the 5 Day Adoption film as a 30 minute, personal project to share with friends and family.

In 2015, Mr. Peeples and the adoptive family both felt led to step into the Jordan together and bring Christina’s story to the world. On March 26, a Kickstarter campaign was launched in faith to raise the needed funds to complete production and post-production. In less than 3 days, support poured in from around the nation and we sailed past our minimum goal quicker than we imagined. We were now getting close to reaching our 1st stretch goal of $5,000. Eight days into our campaign, we reached our first stretch goal with the help of 52 backers. And by the time the campaign was over on April 15th, 91 backers not only helped us reach our 2nd stretch goal of $7,500, but we were able to raise over $8,000. These funds will help cover production and travel costs, post-production costs, music licenses, and more. We’re so thankful for our friends and backers willing to help us spread this story to the world. 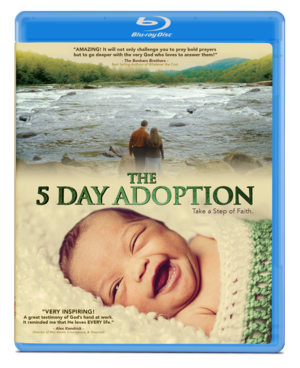